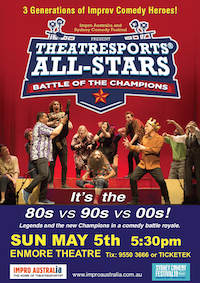 We here at Academy of Improvisation were lucky this past weekend to see Sydney Theatresports as the hero, with Theatresports All-Stars at the Enmore Theatre. This was a celebration of Sydney Theatresports from the 80s, 90s and 00s, featuring a selection of Theatresports players from various eras — although there were also some from the 10s. With the current rise and rise of improvised everything, it was great to be reminded of how far improvisation has come in Australia since those crazy Sunday evenings in 1985 at the Belvoir St. Theatre. Not only through this show, but by the fact that there were at least 4 improvised comedy shows on in Sydney the same evening, including Sydney impro legend Rebecca De Unamuno in her latest show also at the Enmore Theatre.

Sydney still needs marquee shows like this, to show how it once was and still is done, according to the rules of Keith Johnstone’s Impro System, in what is currently a city awash in different and in some cases mangled comedic improvisation methods and techniques. That’s not to say that different methods or even mangled ones are bad, just that all–encompassing methods take time to refine, whereas Sydney Theatresports has been doing it for almost 35 years. So while the latest beginners continue to learn, explore and experiment with both impro and improv, we still have the Johnstone continuing to fuel Theatresports for the foreseeable future.

Sydney’s Theatresports Inc., the first Australian incarnation of a theatre company for improvised theatre, produced Theatresports in Sydney from almost the beginning, but went into liquidation at the end of 1990s after trying to finance the holy grail of improvisation in Sydney, owning their own physical theatre space — in this case the old Valhalla Cinema in Glebe. Theatresports Inc. by that time had trained thousands of improvisors, produced hundreds of shows including Theatresports and countless others exploring what could be done with Johnstone’s system, as well as introducing corporate work and school training based on his techniques. The following year, a group of key players came together and instead formed the not–for–profit Impro Australia, the Theatresports theatre company that we know today. In hindsight, this was all necessary in order to break the monopoly, and allowed numerous other small theatre companies to pop up in the early 2000s.

From around 2002, impro began to go through a number of waves of popularity, with player numbers going up and down every few years, but on average still slowly increasing. By the mid-2000s, the Internet began driving more of this resurgence, so that by the early 2010s, Chicago based long–form improv methods had started to take hold in Sydney. And with a new cultural awareness of improv via U.S. television comedy, by 2015 new schools of improvisation had begun to pop up in Sydney, recently rivalling and arguably surpassing the number of students trained in each of the previous 30 odd years.

And so by 2017, there were a number of quite large improvisation schools in Sydney, each teaching a different method or approach, with enough difference between them for students to justify training at each. And in early 2019, the relatively new Improv Theatre Sydney finally hit a key milestone and did what Sydney companies have been hoping to do for the last 35 years. They opened their own training centre, with hopefully their own theatre space to follow later this year. While they are the first to do so in Sydney after several attempts by companies over the years, we’re sure they won’t be the last.

Competition between schools at the moment is particularly cutthroat, after a couple of years of large student numbers and a need to fill those ongoing classes with new people. But all things considered, Sydney is still a community of improvisors — if not now quite a large one — where we mostly still all know and respect each other. So we here at Academy of Improvisation are proud to congratulate our good friends at both Impro Australia — for keeping Sydney Theatresports alive and close to how it was in those early days — and at Improv Theatre Sydney — for opening what will hopefully be Sydney’s first of many theatres owned and run by a company of improvisors.

For improvisation in Sydney, the next 5 years will be a wild ride indeed.